January 23, Epiphany 3: On the Shore and In the Hills 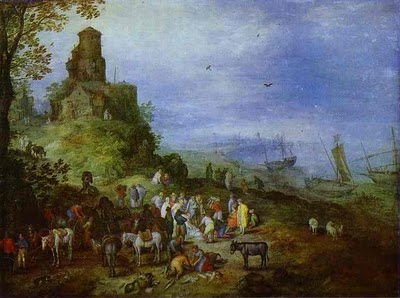 Email ThisBlogThis!Share to TwitterShare to FacebookShare to Pinterest
Labels: Sermons

This was just sent to me be a parishioner, and I love it:

Eagle's Wings. ". . . So are those words which are spoken of God himself, appliable to his Ministers, that first, The Eagle stirreth up her nest, The Preacher stirres and moves, and agitates the holy affections of the Congregation, that they slumber not in a senselesnesse of that which is said.

"The Eagle stirreth up her nest, and then as it is added there, She fluttereth over her young; The Preacher makes a holy noise in the conscience of the Congregation, and when hee hath awakened them, by stirring the nest, hee casts some claps of thunder, some intimidations, in denouncing the judgments of God, and he flings open the gates of Heaven, that they may heare, and look up, and see a man sent by God, with power to infuse his feare upon them;

"So she fluttereth over her young; but then, as it followes there, She spreadeth abroad her wings; she over shadowes them, she enwraps them, she armes them with her wings, so as that no other terror, no other fluttering but that which comes from her, can come upon them;


". . . And so the Minister hath the wings of an Eagle, that every soule in the Congregation may see as much as hee sees, that is, a particular interest in all the mercies of God, and the merits of Christ."
Posted by Old First at 4:51 PM No comments:

Email ThisBlogThis!Share to TwitterShare to FacebookShare to Pinterest
Labels: Congegation

January 16: Epiphany 2, The Lamb and the Dove (for Christina Taylor Green)